What Game of Thrones Teaches Us About Content Marketing

As Game of Thrones’ fourth season came to an end, we bid a fond farewell to another group of key characters in Westeros, Essos, and beyond the Wall. And while we all thoroughly enjoyed every battle, trial by combat, and betrayal of loved ones, we still have yet to learn from our standing fellow characters that can teach us a thing or two about content marketing. (Warning: spoilers ahead!)

Cersei Lannister, the Queen of Strategy, skillfully plans ahead throughout the season of Game of Thrones to achieve her long-term goals. She tactfully develops her network and uses her social influence to position herself for success.

The show’s writers do the same. We checked out how the show is talked about online, and found some very interesting nuggets. 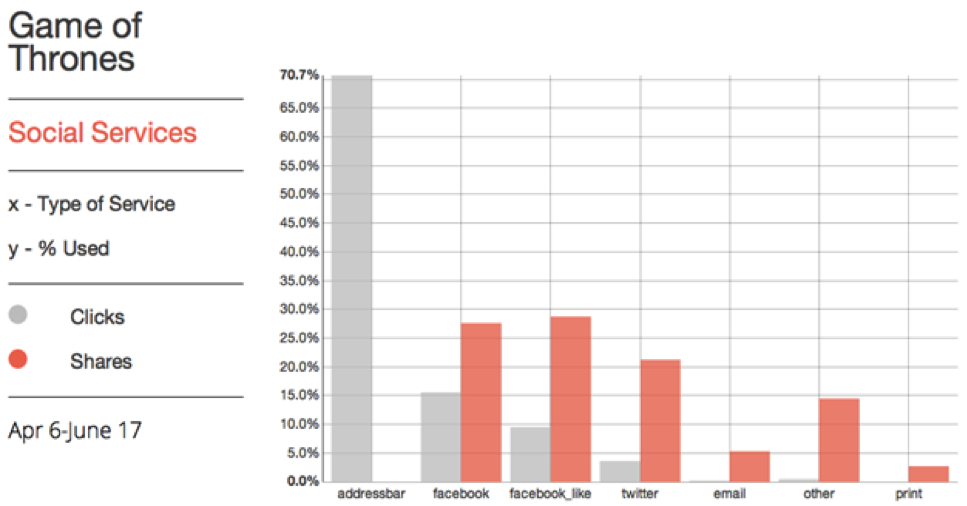 Throughout this past season, a good chunk of GoT content was shared through Facebook and the Facebook Like button, though a majority of sharing was by address bar copy/paste. Twitter was the second most popular social service used by fans to talk about the episodes, share popular reviews, and spread memes (no surprise there).

Of course the riveting show generates lots of chatter even after the season finale, but what’s even more interesting is how the episodes affected chatter around the time of the airing. We checked out this past season’s clicks and shares after each week’s episode to find that Tyrion Lannister’s amazing speech at the end of the May 11th episode, “The Laws of God & Men,” thrilled fans, giving the show almost a 100% increase in social mentions. That spike lasted almost the entire week, too!

GoT sure did give us a lot to talk about, and we’re still talking about the show even after the season ended. Lessons every content marketer can take from GoT: hosting events are great ways to generate social chatter, but also have great content and social sharing buttons on your site so your fans can easily share it with their networks.

Start thinking like a Game of Thrones creator, and get your content ready! See what your audience wants from you, and add eye-catching social buttons so they’ll share. Start by signing into your AddThis dashboard.

What other lessons did you learn from Game of Thrones?