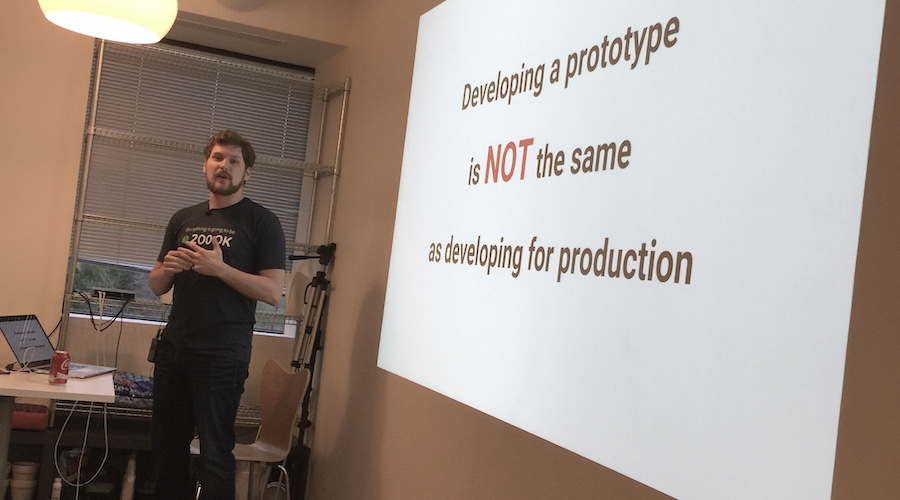 At this month’s NoVA UX meetup we had a double feature, with two presenters talking about prototyping and demonstrating some great tools and strategies.

Danny Blue, a developer at Deloitte Digital, began with an overview of prototyping, exploring how it differs from designing and developing production-ready products. His presentation included some great pictures of early prototypes of products such as the Wii U.

Next Levent Gurses, founder of Movel (who also sponsored the event, thanks!), took the stage and demonstrated three different mobile prototyping scenarios. First, he created a paper prototype of a mobile banking application with napkins and an app called Prototyping on Paper – in less than 10 minutes.

He then showed the group how Sketch can be used to create prototypes, and finally introduced the group to Framer.js for scripted prototyping for mobile phones and even the Apple watch.

Check out his slides for links to these and other prototyping tools that your team can use to test and validate ideas quickly and inexpensively.

For next month’s meetup we’ll be hosting a special panel discussion about women in the UX field, moderated by Jen Bergstrom-Romano, formerly of UXPA-DC and now part of Facebook’s research team.

If you work or are interested in one of the UX-related fields in the Northern Virginia/DC metro area, check out the NoVA UX meetup group and join us at a future event.